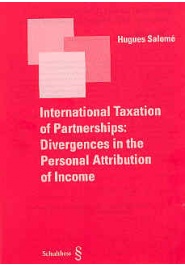 Divergences in Personal Attribution of Income

Sprache: ENGL! Partnerships are extensively used by individual and corporate taxpayers in the field of private equity investments, venture capital operations or building projects. Yet, their legal features as well as their tax treatment may vary from one jurisdiction to another. In particular, States may disagree as to the person to whom the income derived by a partnership should be attributed for tax purposes. In a cross-border context, such divergences may result in double taxation or double non-taxation situations. In January 1999, the OECD released a report («the Application of the OECD Model Tax Convention to Partnerships») which aims at solving these issues and the recommendations of which were inserted in the 2000 update of the OECD Commentary. The purpose of the present study is to explore whether the solutions advocated by the OECD apply to both existing and future double taxation conventions concluded by Switzerland. To that end, it first goes through the Swiss fiscal attribution rules pertaining to domestic and foreign partnerships. It then considers the application of Swiss tax treaties and the principles controlling their interpretation. When moving to the analysis of the principles developed by the OECD with respect to partnerships, the author demonstrates that the latter result from a correct interpretation of tax treaties. As a consequence, the study submits that these principles should generally be applied to all tax treaties drafted along the lines of the OECD Model Convention.